When Dennis Cooverman gives the commencement speech at his graduation, his friend tells him to let it all out. So he proclaims his love for Beth Cooper the head cheerleader, and says things about everyone in the graduating class as well as some other people. Later Beth confronts him and he invites her to a graduation party at his house. And to his surprise she and two of her friends show up. But also some of the people he offended with his speech, who want to tear him apart. And one of them is Beth's boyfriend whom she just broke up with. So they all get in Beth's car and drive away. And what follows is a wild adventure.

Phil and Claire Foster are a couple who have been married for several years. Their days consists of them taking care of their children and going to work and coming home and going to bed. But they find time to have a date night wherein they go out and spend some time together. When another couple they know announce that they're separating because they're in a rut, Phil feels that he and Claire could be too. So when date night comes Phil decides to do something different. So they go into the city and try to get into a new popular restaurant. But when it's full and still wanting to do this, Phil decides to take the reservation of a couple who doesn't show up. While they're having dinner two men approach them and instructs them to stand up and go with them. They think the men are with the restaurant and want to talk to them about taking someone else's reservation. But it appears the couple whose reservation they took crossed someone and the two men work for this person. The men are after something, but whatever it is they don't have it.

Danny (Adam Sandler) must engage Katherine (Jennifer Aniston), his faithful assistant, to pretend to be his soon to be ex-wife. Danny must pretend that he is married, because he lied to his dream girl, Palmer (Brooklyn Decker) the most gorgeous woman in the world. To keep the woman he loves, covering up one lie soon turns into many lies.

Jim Levenstein has finally found the courage to ask his girlfriend, Michelle Flaherty to marry him. She agrees to get married, but the problems don't stop there for Jim. Now along with Paul Finch and Kevin Myers, Jim must plan the wedding. Unfortunately Steve Stifler is in town and won't let the wedding go past without having some fun himself, which includes setting up a secret bachelor party. 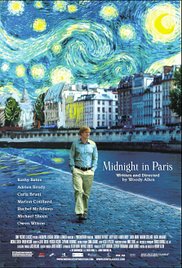 Gil and Inez travel to Paris as a tag-along vacation on her parents' business trip. Gil is a successful Hollywood writer but is struggling on his first novel. He falls in love with the city and thinks they should move there after they get married, but Inez does not share his romantic notions of the city or the idea that the 1920s was the golden age. When Inez goes off dancing with her friends, Gil takes a walk at midnight and discovers what could be the ultimate source of inspiration for writing. Gil's daily walks at midnight in Paris could take him closer to the heart of the city but further from the woman he's about to marry.

In Los Angeles, Nikki is homeless, car-less and closing in on 30, but he's amoral, good-looking, and adept in the sack, moving from one wealthy woman of 35 or 40 to another, a kept boy-toy. His newest gig, with Samantha, an attorney whose house overlooks L.A., is sweet, although it's unclear how long she'll put up with him. Then Nikki meets Heather, a waitress. Is the player being played, or might this be love? What will Nikki discover?

Early thirty-something dentist Dr. Charlie Logan has never experienced true love, despite having had a number of girlfriends over the years. After an announcement by one of his ex-girlfriends as such at her wedding, Charlie gets a reputation as being a good luck charm. Every woman he has slept with has met and married her dream man immediately following. He is encouraged to exploit this reputation by his long time best friend, Dr. Stu Klaminsky, a sex obsessed, sex starved schlub who became a plastic surgeon just so that he could masturbate over the sight of women's breasts. Charlie doesn't want to be solely a stepping stone for women, which is how they end up treating him once he gains this reputation as a lucky charm, but rather one's true love. He believes the woman of his dreams is accident-prone Cam Wexler, who works as the penguin caretaker at the aquarium. Cam initially doesn't want to date Charlie because of his reputation as a one-night stand type of guy. Charlie in turn doesn't want to sleep with Cam as he is certain she will find her true love after they do. Cam's true love seems destined to be penguin expert Howard Blaine. To get to true happiness, Charlie feels he needs to speak to Anisha Carpenter, who he feels is the cause of his current problems. Anisha ends up helping him in a way he doesn't expect.

In 19th century Dublin, Albert Nobbs, an eccentric man in the latter part of middle age, works as a waiter in Morrison's Hotel run by the stingy and controlling Marge Baker. Albert is hard working and saves his money so that one day he will be able to eke out a better life for himself by owning his own business rather than work at the hotel. Beyond his work colleagues, he is all alone in the world. One day, a man named Hubert Page is hired by Mrs. Baker to paint one of the rooms in the hotel. She forces Hubert to share Albert's bed for the one night he is required to stay to complete the work, much to Albert's horror. Hubert discovers the reason Albert did not want to share a room with him. But rather than the issue being a problem, Hubert shows Albert that he can follow a slightly different life path than the one he envisioned for himself - one closer to the life that Hubert leads with his wife Cathleen - which includes getting married and having a wife to support him emotionally. Albert's choice as a bride is his younger flirtatious co-worker Helen Dawes, who, unknown to Albert, is already in a sexual relationship with the brusque and sly Joe Mackins, another co-worker recently arrived to Morrison's. As Albert, Helen and Joe play their respective games of courtship, Albert may find that what seemed to come naturally to Hubert may be more difficult for him.